The end of a marriage is an unfortunate event, experienced by thousands of Canadians each year. A divorce or separation is highly emotional and highly complicated, particularly when there are children involved. As of March 1st, 2021, Canada has introduced updates to its existing Divorce Act. This series of guidelines focuses on promoting the best interest of children, addressing any instances of violence that might have occurred during the union, and intends to make Family Justice more accessible to the public.

Family Law Guidelines have attempted to address these aforementioned topics in the past but the New Divorce Act aims to incorporate updated terminology, more accessible language and more thorough examinations of parent-child relationships following divorce and the rights and responsibilities therein.

How The New Act Focuses on the Best Interests of Children

The New Divorce Act focuses on what is deemed to be in the best interests of children following a divorce or separation. The term “best interest” refers to the emotional and physical well-being of a child, both in the moment and for the future to come. In order to accomplish this, The New Act reevaluates the divorce process in those areas that it might impact a child, or children:

Language and Terminology: In the past, terms like “custody” have developed a negative connotation. The New Act replaces these traditionally abrasive terms with more accessible language, such as “parenting time” and “decision-making responsibility”. This new terminology redirects focus from a perceived battle, to the needs of the child and the responsibilities of each parent.

Abusive Situations: The New Act considers the impact of family violence on children. Abuse carries a broad definition covering physical abuse, sexual abuse, threats of harm to persons, pets or property. Harassment and psychological or financial abuse also falls under this umbrella. In situations of abuse, courts have a duty to consider civil protection orders and/or child protection orders in situations where children are involved.

Resolution Outside of Court: The New Act encourages parties to settle disputes outside of a court environment. Advisors should champion resolution through mediation, negotiation and collaborative law, whenever it is appropriate. In British Columbia, there is also the option of a “Notice to Mediate” which allows one party to demand the other attend mediation in an attempt to resolve disputes.

The Child’s Opinion: When determining the best interests of a child, courts can make their determinations based on the views and preferences of the child themselves. While this cannot be the sole factor in making a determination, it is important for children to feel heard. When reviewing these opinions, courts will consider age and maturity levels of the children.

Relocation: It is not uncommon for one parent to want to relocate following a divorce. The New Act creates a framework for both parents to voice their opinions on the subject of relocation and come to a decision as to the most beneficial outcome for their child. The party looking to relocate must give a minimum of 60 days’ notice. A relocation must be uncontested from the opposing party and authorized by courts in order to proceed. Provisions around relocation are the most significant changes made in The New Act. In situations where the party with the most parenting time is the one looking to relocate, it is up to the other parent to prove that the relocation is not in the best interest of the child and vice versa, in order to prevent or encourage the change in location.

Non-Parent Relationships: The New Act allows courts to grant visitation or involvement to grandparents or other non-parent relatives or persons who have proven to play an instrumental role in a child’s life. This is also mentioned in guidelines set forth in the BC Family Law Act. 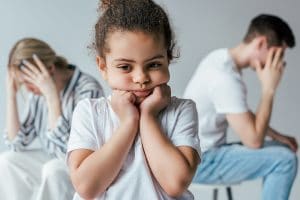 Support is impacted by the division of parenting time and the responsibilities therein. Following a divorce or separation, each party has responsibilities to any children involved, as well as to the maintenance of a safe and supportive home environment within both households.

Child Support: The division of parenting time will have a direct impact on the level of financial support applied from one party to another. In situations where time is divided equally, each party will pay support to one another according to income. When the division of time leaves one parent with direct care for 60% of time or more, then that parent is the sole caregiver entitled to child support.

Seeking Equal Parenting Time: Following a separation, it is not uncommon for a child to spend more time with one parent than the other. This may be due to scheduling or convenience but it is possible to achieve an equal division of parenting time between two households. If this is the intended outcome, it is important to maximize involvement in activities such as homework, sports, medical and dental appointments. The more involved you are, the better your chances of reaching 50/50 parenting time following the separation.

It is clear to see that The Divorce Act has been amended with the care and concerns of children in mind. The New Act should function as a guideline for divorcing couples, in order to divide their parenting time and maintain conduct in line with the best interest of their children.